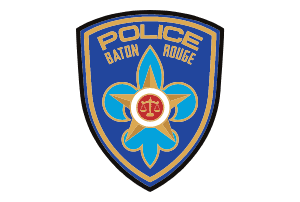 Growing up in Denham Springs, not far from the streets he patrols now, Corporal James Crisler idolized his grandfather, Gerard Joseph Simon. Simon was a graduate of BRPD’s 13th Basic Training Academy in 1965 and worked for the City of Baton Rouge as a police officer for several years before transferring to the East Baton Rouge Sheriff’s Office.

“He was old school,” Crisler explains. “We had a very close bond. He was headstrong. But he was even more caring and giving, and he instilled a strong work ethic in me very early. My grandfather treated everybody with respect. He could talk to absolutely anyone, about anything, no matter what walk of life they were from because he didn't judge people for how they looked, where they had been, or what they had been through. I wanted to be just like him.”

Although Gerard Simon passed away on July 27, 2011, one day before Corporal Crisler had his first interview with BRPD, those who have worked with and encountered Crisler say he too is known and admired for the way he treats people.

“Officer Crisler has an outstanding attitude and a genuine love for his job. His passion for his work is reflected not only in his competency but also in how he treats his peers and the people he comes across while on the job,” says Lt. William Clarida, Commander of BRPD’s Uniform Patrol Division. “As our organization works to build relationships in our community, we want the citizens of Baton Rouge to see and experience the highest level of professional respect. That starts and ends with each officer and their personal commitment to treat every individual like they would want to be treated. Officer Crisler exudes that simple but profound guiding principle.”

“I’m not scared. But I’m very tactful and aware,” Crisler says. “Looking back now at when I joined the force, I realize I was just a young officer raring to go. But I’ve matured so much. And our training is top-notch. That gives me the ability to do my job and do it well. And it improves our odds at being effective at protecting the citizens of Baton Rouge, as well as our own safety.”

During his regular daily patrols, Officer Crisler has at this side one of the most beloved members of the BRPD, an eight-year-old German Shepherd named Simon, who was selected specifically for Officer Crisler when he joined BRPD’s Canine Division seven years ago. Of course, Simon’s name is a tribute to Officer Crisler’s personal hero, his grandfather.

Crisler and Simon have trained together for more than 1,000 hours. And while canine officers are typically thought of for their ability to track suspects, Simon is also one of ten canine officers the Department relies on to help find children, elderly, or mentally ill patients who are missing.

"Using our canines, we can find a person much faster than with just a police officer. And even when we rely on our canine officers to track suspects or missing property, there are very strict policies that guide when and how we employ our dogs,” Crisler adds.

Crisler earned an Associate Degree in Criminal Justice from Baton Rouge Community College. When he’s not working, he enjoys spending time with his wife and two daughters, as well as sports, hunting, and fishing.

Nevertheless, the job always seems to be a calling. “We see so much at work that is hard to forget, especially when children and families are involved. At the same time, I remind myself that even if I can’t change the world, there are people I can help. And I just try to do that and do it well every day.” 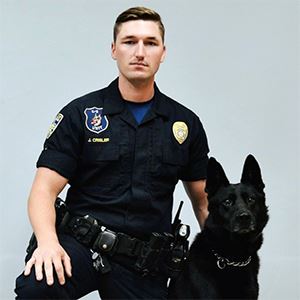