In August  2021, Officer Antonio Williams was the first officer to arrive on the scene of a domestic violence call. Quick and smart decision-making helped Officer Williams deescalate a volatile situation and earned him accolades as a local hero, including a news article in the Advocate.

But for Officer Williams, a five-year veteran of BRPD, each situation represents an opportunity to be a hero, whether it’s a life-threatening encounter with an armed suspect, or simply interacting with members of the community during regular patrols.

“We have discretion in our work because we make choices every day,” Officer Williams said. “We have chances to demonstrate police officers aren’t uncaring robots. We sleep, eat, and breathe. We overcome hardships and experience joy. We are human. And we can show that through compassion – many times during some of the most difficult times of people’s lives.”

As he described his passion for his job, Officer Williams recalled a recent conversation with an individual who approached him while he was working extra duty at a Mardi Gras parade. “He came up to me and said, you don’t remember me, do you? But you had to pull your gun on me about a year ago You got a call about me, and I was armed. But that experience, looking down the barrel of your gun, I realized then that I don’t want to die. You saved my life.”

Officer Williams is a native of Baton Rouge. He grew up in the Villa Del Rey area and attended Glen Oaks High School. Now he patrols those same streets, seeing the best in people and focused on the job he describes as a gift.

“People are very kind, very genuine. Every day, people stop us and thank us for our service. They’re always trying to do things to show their appreciation. So many times, I get to the drive-thru or counter of a local restaurant only to hear ‘the lady in front of you saw your patrol car and paid for your meal. Those random acts of kindness remind me of why I became a police officer. What we do does matter.”

When Officer Williams isn’t working, he spends his time with his wife, Deja, and his daughter, Alani, who he says is equally committed to his work.

“Being a police officer is a family commitment. Anytime they can be part of my job like when I’m working an event, I promise you they are going to be standing on the corner closest to me. Family is huge. It’s everything.”

Lt. William Clarida said Officer Williams exemplifies the kind of attitude BRPD strives to inspire. “Some days are harder than others. But we want officers, like Officer Williams, who give their best every day, who see beyond the immediate challenges in front of them and instead recognize the potential to make a tremendous impact.”

In October, Chief Murphy Paul invited Officer Williams to address graduates of BRPD’s 87th Academy. During his address, the 27-year-old, who sometimes teaches teens to drive, related driving to being a police officer. 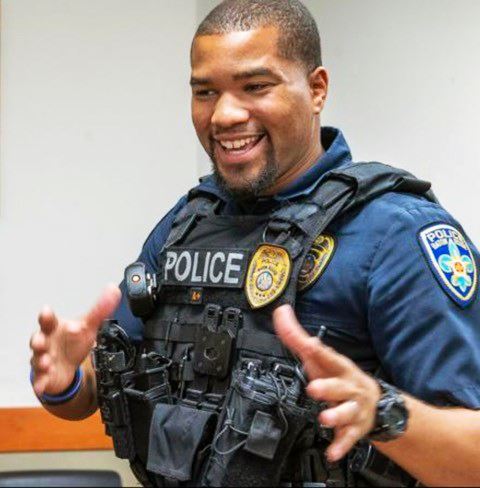