Sgt. Belford Johnson is passionate about young people and the impact of law enforcement in the community. Since joining the BRPD’s Community Services Division, Sgt. Johnson has fervently pursued opportunities to link those passions, through mentoring and training programs that connect young people to the BRPD.

The Baton Rouge native and Southern Lab alum says when he was growing up in North Baton Rouge, his impression of police officers was formed from what friends and family told him. “Coming from that type of environment, it was common practice to believe the police were the enemy,” Sgt. Johnson explains. “While I was never in trouble myself, some of the people around me had multiple run-ins with police. There was absolutely no love lost between them and police. So, I never imagined or aspired to become a police officer.”

However, Officer Johnson’s negative feelings about police officers were challenged when he was working and pursuing a degree in Microbiology at Southern University. That’s when he met and became friends with several local law enforcement officers, including current Baker Police Chief Carl Dunn. “I started talking to them and realized they were regular people who were simply doing a job and trying to feed their families, while protecting the community at the same time. It opened my eyes to see the other side of the situation I grew up in, giving me a new perspective.”

The seeds were planted. But it was a detour from his plan to become a doctor that led Officer Johnson to find his place at the BRPD. That was over two decades ago.

During his twenty plus years at the BRPD, the husband and father of three worked in Uniform Patrol and Homicide, before joining the Department’s Community Services Division two years ago. His own childhood experiences and his desire to help strengthen the bond between the community and law enforcement inspired Sgt. Johnson to start the Explorer’s Post #225 program and to re-launch the Department’s Cadet program, which had been inactive for over twenty-five years.

“I don’t want young people today to form their impressions about law enforcement based on what they see on social media, or what their buddy tells them,” Officer Johnson says. “While we’re not perfect or above the law, we want to expose them to real experiences and let them form their own opinions of the profession. Our children are our most cherished assets, and it only makes sense to reach out to them, while their ideas are still being shaped. Who knows, they can grow up and change the whole outlook on law enforcement with new and innovative ideas” Officer Johnson says.

The BRPD’s Explorers Post #225 program is for children ages 14-18 years old. The program provides participants with real-life experiences as a first responder, with an emphasis on law enforcement. As explorers, participants learn their rights and local and state laws. They are trained in First Aid and CPR, with an opportunity to ride with EMS to calls. Explorers experience the required responsibilities of each division of the BRPD, while engaging in team building skills and more. “Most importantly,” Sgt. Johnson says, “they learn compassion for their fellow citizens through community service and volunteerism.”

Adults ages 18-21 can opt to participate in the BRPD’s Cadet program, whereby participants actually work full-time for the BRPD, shadowing police officers in every Division.  Although Cadets must still complete the Department’s Training Academy to become a sworn police officer, their years of service start accruing on their first day as Cadets. And it appears that the Cadet program is achieving its objective. Two individuals from the 2020 Cadet class are applying to the Spring 2021 Training Academy.

When Sgt. Johnson isn’t working, he loves spending time with his wife, Kimberly, who is a nurse, his three children, and his big, extended family. His favorite pastime is fishing, a hobby he took up to spend quality time with his children. Fresh water or salt water, Officer Johnson says he isn’t picky. “Wherever there’s water, that’s where I’m going.” 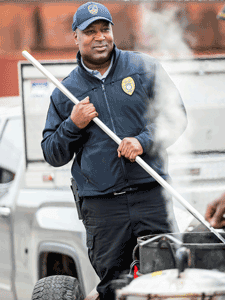