Judge Alexander earned a J.D. from the Louisiana State University Law Center in 1979, where she attended law school on the Earl Warren Legal Scholarship.  She earned a B.A. in Political Science from Grambling State University in 1989.

Judge Alexander has been an active voice for Louisiana Legislators, attorney offices and East Baton Rouge Parish Public Defender’s Office, Secretary of State Fox McKeithen’s Office as an Ex-Officio Member, Assistant Attorney General for the Louisiana Attorney General’s Office and today, being 27 years, she continues to sit on the bench in Division D of the Baton Rouge City Court.   She was the first African American woman to be elected to the Baton Rouge City Court, the First African American woman to serve as Chief Judge of that court and the President of the American Judges Association.

Judge Alexander became interested in community and public service at a young age after working on her father’s election committee.   She realized she wanted to become a Judge early in her legal career because of many Judges’ inferior treatment of defendants.  She vowed to work towards changing this treacherousness.   She believes that in order to change a system you must be in a decision-making position in that system.  She has worked diligently towards this goal. Her campaign slogan was “Your Voice for Justice”.   She believes that all Judges should strive to administer justice with fairness and compassion.

Let go of what you think life should be and just enjoy the life you have. That doesn’t mean you shouldn’t strive for a better life, it only means that you should not be consumed by what you don’t have and miss out on enjoying the wonderful life you have. 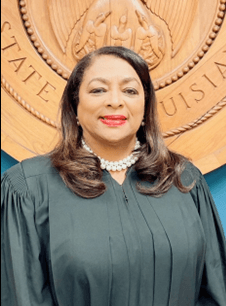